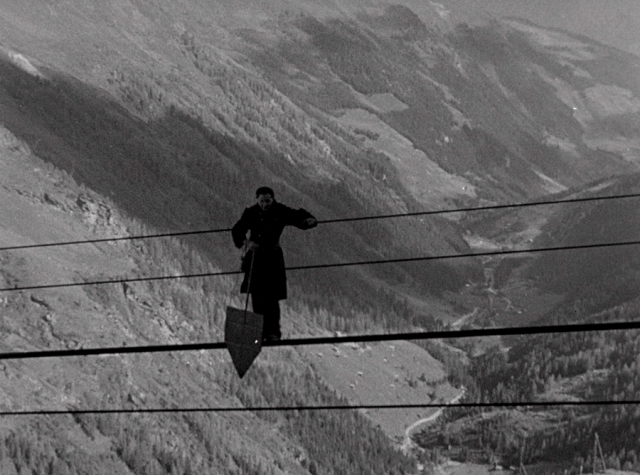 The incursion of Nouvelle Vague into modern cinema coincides in fact with the golden age of industrial movies: the Fifties and the Sixties. As Ermanno Olmi demonstrates as an example, bringing industrial infrastructure to the screen allows us to confront ourselves with the landscape of modernity. Something that also applies for Godard, whose Operation Béton is a movie-making experience as important as Two or Three Things I Know About Her or Weekend. Back in 1966, Kieslowski was already trying to peek behind the facade of real socialism. Bernardo Bertolucci on the other hand, makes Il Canale from another production commissioned by ENI (The way of Oil), filming the Tanker crossing Suez to capture 20 seconds of authentic poetry. Presented by cinema historian Sergio Toffetti.

OPERATION BÉTON by Jean-Luc Godard (Opération Béton, Switzerland, 1958, 20′, b/n). In 1952, Godard returned to Switzerland where he was hired as a switchboard operator at the Grande Dixence construction site. During the long hours of inactivity, he conceives the project for a movie to be sold to the structure.This short movie illustrates the fifteen years that were necessary to build the dam, which at the time was considered to be the tallest in the world. The movie premiered in theaters with Vincente Minnelli?s Tea and Sympathy, one of the Hollywood filmmakers defended by the young critic on the pages of Cahiers du Cinéma. With the profits from the sale of the movie to the Compagnie de la Grande-Dixence, Godard will be able to afford to live two years and shoot his first short fiction film: Une femme coquette.

THE SONG OF POLYSTYRENE by Alain Resnais (Le chant du Styrène, Italy, 1958, v.it. 13′). Italo Calvino?s version of Raymond Queneau?s text serves as a narration of Alain Resnais? documentary about polystyrene production. The entire production cycle is documented: from the raw materials getting processed in modern petrochemical installations, to the fine wire and colored granules used in the production of plastic items by means of vacuum and molding processes.

THE INDUSTRIAL AGE – THE METAMORPHOSIS OF THE LANDSCAPE by Éric Rohmer (L’ère industrielle – les métamorphoses du paysages, France, 1964, 23′). After making his debut with Le signe du lion in 1958, Eric Rohmer gradually abandoned Cahiers du Cinéma and learned the craft of filmmaking by cutting his teeth with a series of documentaries for School Television. In L’Ère industrielle he reflects on the changes that industrial installations introduce into the landscape, anticipating the artistic work of Berndt and Hilla Becker. In fact, Rohmer begins here his reflection on the forms of modernity in architecture and urban planning, which will lead him in 1975 to make Villes Nouvelles, tv series dedicated to the Parisian Banlieues that will serve as the background for his Comédies et proverbes cycle, which also includes the moviesi Full Moon in Paris (1984) and Reinette et Mirabelle (1987).

THE CANAL by Bernardo Bertolucci (Il Canale, Italy, 1967, 12′). Engaged on the Suez Canal during the realization of La via del petrolio (three 50 minute episodes commissioned by ENI), Bernardo Bertolucci and executive producer Giorgio Patara, enthralled by the dreamlike vision of ships? passage against the background of the small Egyptian town?s two roads, they decide to make a short film dedicated to life on the streets of Suez. Unlike the feature film, The Canal was shot in color and creates juxtapositions of anachronistic disorientation, between the fellahs with their camels and the majestic and terrible pace of progress at the slow and inexorable pace of the oil tanker. The disturbing poetry of modernity is accentuated by the reading of Arthur Rimbaud?s Le Bateau ivre read by Riccardo Cucciolla at the beginning of the movie.

FACTORY by Krzysztof Kieslowski  (Fabryka, Poland, 1970, 17′). A day of work in the Ursus tractor factory in Warsaw, between assembly lines and board of directors meetings: the achievement of the production quota is far behind due to lack of equipment. Kie?lowski is back to stigmatize Soviet bureaucracy by describing the daily absurdities that workers had to face.

Thanks to Actua Films, Cineteca Nazionale, Edison and ENI for their collaboration.